Evacuating an American Hero! Posted on on January 18, 2017 by isaadministration

Since 1996 one of the companies Insurance Services of America (ISA) proudly represents is Seven Corners (originally called Specialty Risk International). Seven Corners has successfully handled for our clients several Emergency Medical Evacuations. The following is one of their most famous.The following article is from our friends at Seven Corners:

It’s a new year, and we’ve been busy. You probably know our Seven Corners Assist team works hard 24/7, but did you know they recently evacuated an American hero? 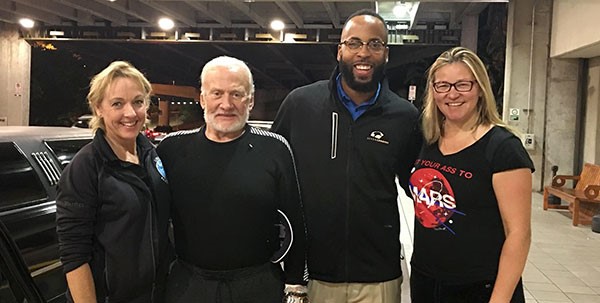 You probably already know our Seven Corners Assist team works hard 24/7, but did you know they recently evacuated an American hero?

In December, Buzz Aldrin (yes, the second man to walk on the moon!) headed to the South Pole with White Desert, a tour company for which we provide travel insurance. While talking to scientists at the National Science Foundation (NSF), he began having difficulty breathing. The altitude is very high there at 9,301 feet above sea level, and this was impacting his condition. The NSF moved quickly, arranging a flight to McMurdo Station in Antarctica. From there, Buzz flew to Christchurch, New Zealand.

We received notification of Buzz’s situation when he was in the air on his way to Christchurch. Our team went to work quickly and flew a nurse from the United States to Buzz’s side to monitor his condition and accompany him home. He was diagnosed with fluid on his lungs and treated with antibiotics.

While in Christchurch, we also arranged, under the Emergency Medical Reunion benefit, to fly his daughter, Jan, to his side.

About a week after arriving in New Zealand, Buzz had recovered well enough to fly home in a business class seat on a commercial flight, along with a nurse and his daughter.

A surprise!
Our international assist coordinator, Wes Smith, made a special visit to Buzz’s side. He met him at the airport in Orlando, helped him through the airport without any difficulties, and rode in a limo with Buzz to his house.

As it turns out, neither Buzz nor his manager, Christina, knew he had travel insurance, and they weren’t certain how it would work. This may be surprising because Buzz is no stranger to traveling. But this situation alone reinforces what we already know about travelers in general – a large number of them are still learning about the importance of travel insurance. Because of this recent situation, both Buzz and his manager plan to consider a travel insurance plan the next time they travel.