To celebrate their 30th wedding anniversary, Dr. Sharp and his wife planned a trip of a lifetime, a 2-week cruise along the Italian Riviera. The flight arrangements and cruise reservations totaled more than $15,000, but the couple had been saving for the trip and they were excited to embark on their well-deserved adventure.

A few months before the Sharps began research for their trip, Mrs. Sharp’s elderly mother, Ruth, began struggling with bouts of vertigo. Worried she might need treatment or hospitalization, the Sharps purchased trip cancellation insurance with a cancel-for-any-reason benefit. In case something happened to her and they needed to stay back to help, they wanted to make sure they could be reimbursed some of the non-refundable costs of their trip.

Unfortunately, just two days before their scheduled departure date, Ruth fell and broke her arm and was taken to the hospital for treatment. Dr. Sharp and his wife cancelled their flights and cruise reservations so they could help Ruth through her hospitalization and recovery.

Thankfully, the travel insurance and cancel-for-any-reason benefit covered most of the Sharp’s trip costs. Without the travel insurance, the cruise liner may have honored some of their costs, but not all, and the airline would not have covered any costs. The insurance helped the couple recoup thousands of dollars; allowing them to reschedule their anniversary cruise a few months later.

Robert and his wife Connie are vacationing in Moscow, Russia over the winter holidays. On an evening stroll after supper, Robert slips on a patch of ice and falls on his back. An x-ray would later show that he fractured one of his vertebrae in the fall.

The couple had purchased one of our travel medical insurance plans so Connie went to a nearby store where she called the toll free number on her ID card. The insurance company found no English-speaking medical facility in Moscow to treat Robert so they arranged for him to be evacuated to Helsinki University Hospital in Finland via air ambulance.

Following Robert’s initial treatment in Finland to repair his fractured vertebra, he required ongoing rehab. The insurance company arranged a commercial flight home to the US for the couple and made sure a registered nurse (RN) was on board to tend to his care.

The insurance company billed the Helsinki University Hospital directly for Robert’s treatment. The cost of the air evacuation to Finland was also included in the couple’s benefits and those bills were paid directly by the insurance. The flight home and charges for the RN were also covered by the insurance plan as were six months of physical therapy follow-up care in the US. All totaled, Robert and Connie spent a little over $150 for their insurance coverage and saved tens of thousands in medical and air evacuation costs.

Five years ago, Albert and Linda relocated from their home in Florida to Haiti to serve as long-term volunteers for the country’s poor and underprivileged. They enjoy their new life there and especially the kind people they serve. Because the country has very little in the way of health care, and because Albert has had heart problems in the past, the couple purchased one of our long-term international major medical plans.

Not long ago, Albert was working with a local family when he experienced sharp pains in his abdomen. When the pain didn’t subside for a full day, his wife Linda insisted he see a doctor in Port Au Prince; Albert acquiesced to his wife’s demands.

The Haitian doctors, however, had no access to a CT scanner to perform a proper diagnostic exam of his abdomen. As Albert’s condition worsened, the hospital called Albert’s insurance company to arrange an emergency air evacuation to Miami. Though the doctors in Port Au Prince were ready and eager to remove his appendix, they couldn’t say with certainty if that was indeed the cause of Albert’s pain.

The insurance company managed the air evacuation and coordinated efforts between the hospitals in Port Au Prince and Miami. Once Albert landed in Miami he was seen by an emergency room doctor who performed a CT scan. The scan revealed that he did not have appendicitis, as feared, but something much less serious and treatable without surgery.

Had he not had access to the CT scan, Albert may have undergone surgery in Haiti, lost his appendix for no reason and still not have solved the issue at hand. The insurance not only helped save Albert tens of thousands of dollars for the air evacuation and medical costs, it helped save him from a needless operation. 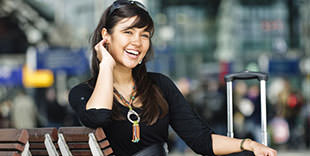 Every question was answered promptly and in a way I could easily understand.
– Bonnie D.


See what our clients are saying »

We’ve tried to make your insurance buying experience a simple one, but we know you may have a question or two.

You Can Reach Us By:

Your trust means a lot to us.
When you spend $100 or more with us
we’ll send a little gift to say "thanks!"

Sorry! This gift is not available to our
group insurance clients.